Our brains can easily accommodate so much information, but why is it that we remember some things vividly while forget others almost instantly.

The solution to overcome this memory retention ration is hidden in the analysis itself. Have a look, till “The Cone of Learning”

It turns out, there’s a formula that describes how we forget things.

At the beginning of the 20th century, Hermann Ebbinghaus (a German Psychologists) did some major research into memory and more specifically, retention. What he found, and what has since been confirmed, is that consistent review is the key to memorization. But he also discovered that there is such a thing as too much review and too much memorizing.

He discovered something called the ‘Spacing Effect’ which determined that the best time for review in order for optimal long-term memory retention is right at the moment you are about to forget. And he came up with this, the forgetting curve: 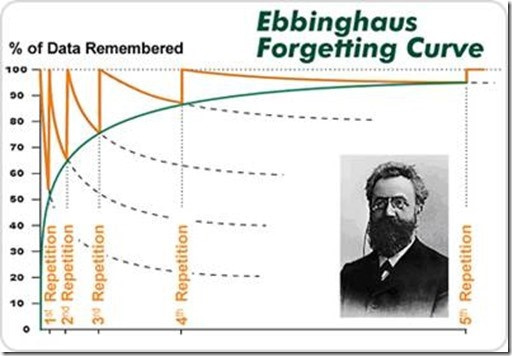 There is another interpretation to this, in terms of % Retention as soon we learn anything. We see that after 31 days, we may be able to retain only 21% of the learning, which was done 31 days before, if no repetition is done with in this period.

Now let’s look at the situation, when the things are to be repeated, so as to increase our retention or saving score to achieve a higher level.

So what is been suggested with Learning or educational videos and books which is being studied may be biting off bite-size chunks, reviewing notes an hour after watching them, and then they might be kept into a 7 compartment cardboard folder, which can be created for each day of the week. 1 month from 1 day after finishing the first video series or book it is imperative to review all the notes and then 3 months and so on. This would increase the retention to a fairly strong memory.

Please take a look at the infographic that further breaks down the factors that impact learning and forgetting.

Memory Retention curve can further be enhanced, if we follow this “Cone of Learning” which is applicable for all ages, and especially for those, who are putting the effort in reaching to bottom of “Edgar Dale” PYRAMID.

Another from NTL Institute for Applied Behavioural Science, “The learning Stairs”