In fact, it never went away.

Some of us get dozens of sextortion scam emails every month to our work and personal accounts, demanding us to PAY MONEY OR ELSE!! 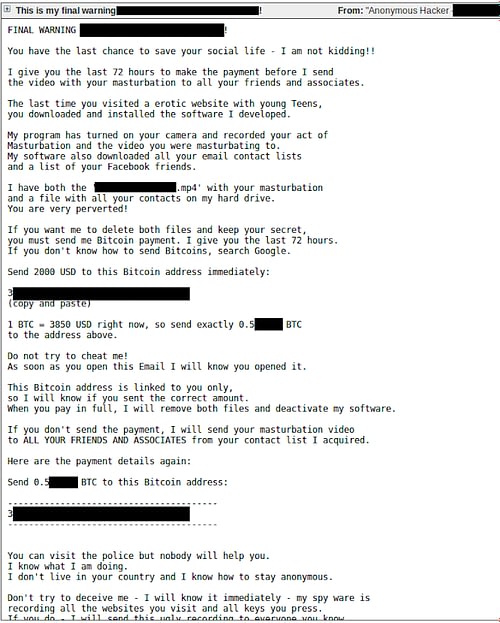 In the crime of sextortion, the “OR ELSE” part is a threat to release a video of a sexual nature in which you are visible.

FINAL WARNING. You have the last chance to save your social life. I am not kidding. I give you the last 72 hours to make the payment before I send the video to all your friends and associates.

How did the crooks obtain this X-rated film in which you’re the star?

They typically claim to have filmed you using malware planted on your computer in some way, for example:

The good news is that it’s all a pack of lies, so you can relax.

But the bad news is that this sort of cybercrime is nevertheless confronting and scary, because of how the crooks claim to have spied on you.

Is it technically possible?

If you’ve ever heard of RATs, short for Remote Access Trojans, you’ll know that malware does exist that makes it possible for a crook to turn on your webcam remotely.

Do the sextortionists have anything on you?

If you receive a sextortion email like the one we showed above, without any stills from the video as proof or a link to view the file, then it’s just bluff and bluster.

The crooks are just trying to scare you into paying them something.

Remember, they send out these sextortions by the million – in the last 24 hours, SophosLabs received 1700 samples of just one new sextortion spam campaign in its spamtraps.

So even if only a few recipients get scared enough to pay, the crooks end up making thousands of dollars with almost no outlay.

Delete the offending emails, and don’t engage with the crooks at all.

But they seem to know all about me!

That’s because the crooks often try to convince you that they really do have “insider knowledge” about you.

They include personal details in the email that allegedly “prove” that there must be some sort of active spyware infection on your computer.

OK, delete the email – but don’t panic, don’t reply to the crooks, and certainly don’t pay up.

If the crooks really wanted to prove they had a “sex tape” of you, they’d send you a still image, or a link where you could preview the file they claim to have.

But they don’t – they just threaten you and present vague and unconvincing evidence that they know something about you.

So, don’t panic, delete the email, and don’t let the crooks trick you into contacting them at all.

Two ways to identify a Phishing email – one easy, the other, complex

Is your social networking a cyber security risk?
About Post Author